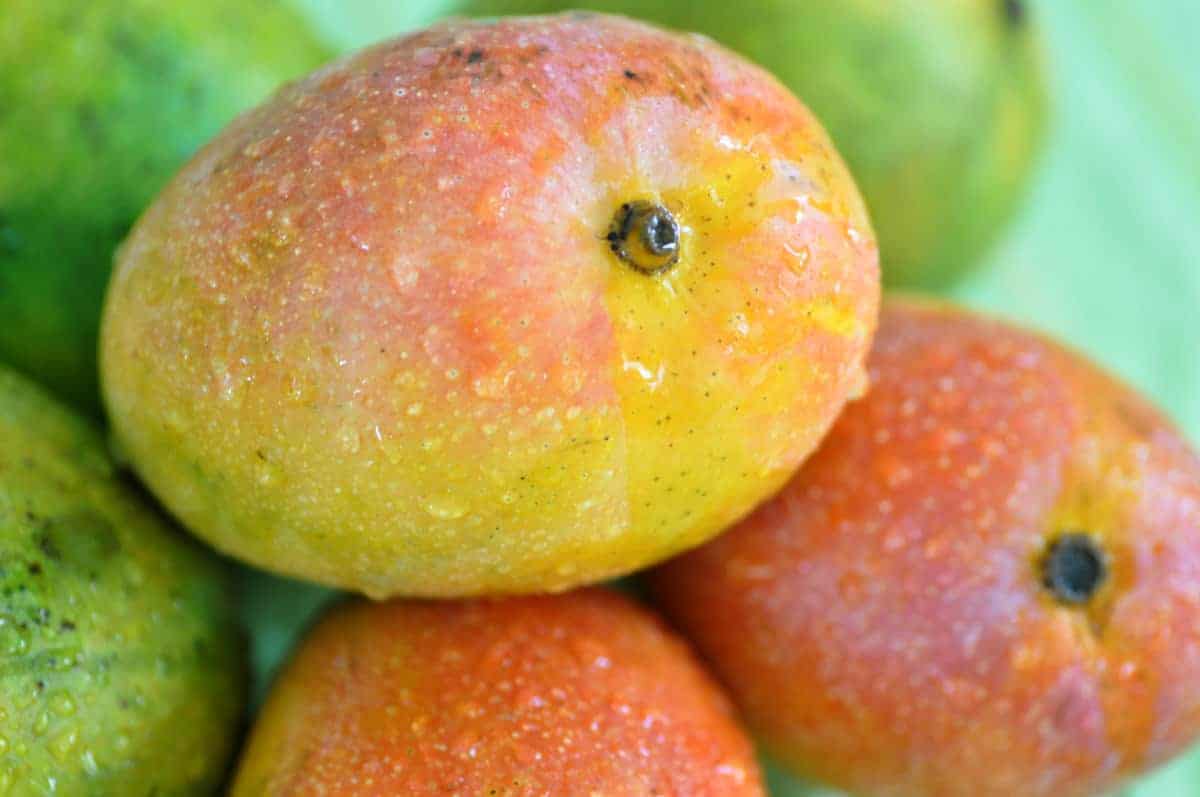 Mango – India’s Gift to the World

Ancient India has gifted many things to the World. Yoga, Ayurveda, Spices and a rich history of culture, architecture, values and of course the King of Fruits – the supremely delicious Mango.

Botanically called as Mangifera indica [+], Mangoes are native to India with a history dating back to several millennia. The word Mango itself has its roots in the Malayalam word Mangga, which was picked up by the Portuguese traders when they started shipping this delicious fruit from the ports of Kerala.

Damalgiri in Meghalaya hosts the earliest fossil evidence of Mangoes, dating back to 60 million years. But it was only around 2000 BCE that Mango was grafted and began to be cultivated in orchards.

When it comes to written reference, the earliest mention of Mango comes as Amra in the Brihadaranyaka Upanishad written around in 700 BCE. Several Hindu, Buddhist and Jain texts have a reverential mention of Mango. It was and still is considered the most popular fruit of The Indian Subcontinent. There are references of Gautam Buddha meditating under a mango tree. Even in Jain scriptures, Goddess Ambika [+] who is considered the symbol of wealth and prosperity is depicted carrying a bunch of Mangoes. 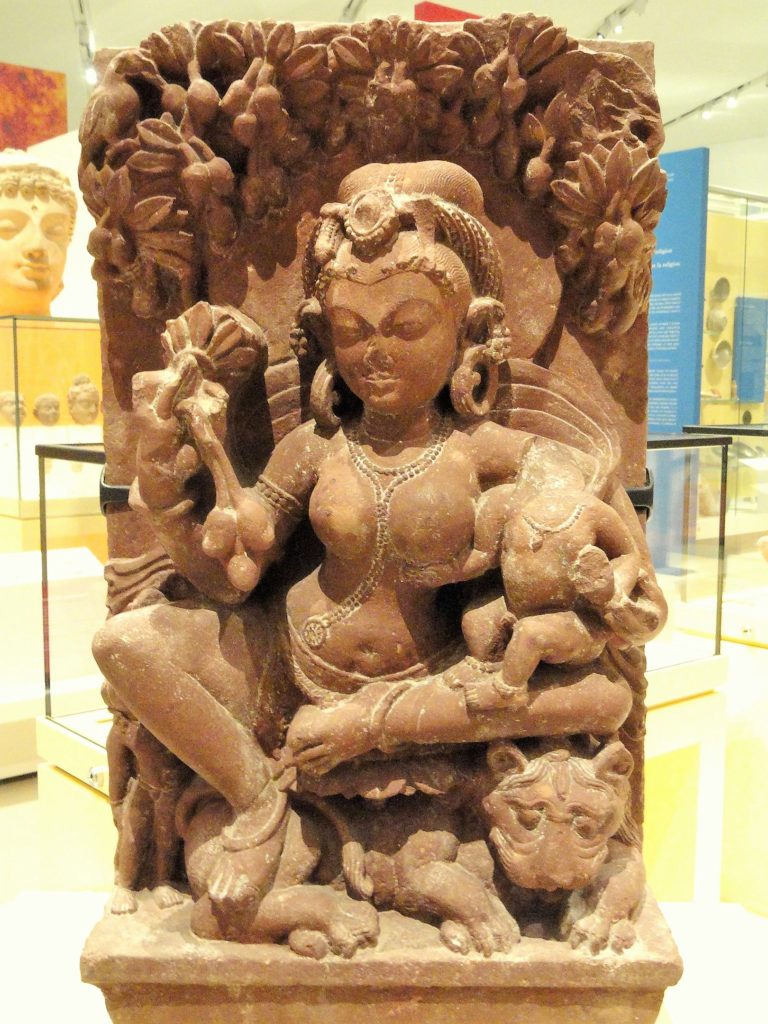 Goddess Ambika sitting on a lion and mango tree branch in right arm and her son in left.

The Buddhist Monks took the mangoes to South East Asia in around 4th and 5th BCE. In around 7th CE, Mango travelled to China and in the 10th Century, traders took it to Persia from where it found a new home in East Africa.

It is to no surprise that this golden fruit found its fans among the commoners as well as the royalty. It’s been a tradition of many Kings to plant Mango trees to showcase their prosperity.
King Ashok [+] had it proudly mentioned on his famous Ashok Stambh. The memoirs of Mughal Kings like Babar Nama, Ain-e-Akbari and Tuzuk-e-Jahangiri have an extensive mention of Mangoes. In fact, Akbar is said to have planted 1 lakh Mango trees in Lakhia Bagh near Darbhanga in Bihar.

In his travel notes, the 14th Century traveller Ibn Batuta [+] mentioned how Indians were fond of their Mango Pickles. He also mentioned about the mango trees present in Mongolia.

Thus Portuguese, who are usually credited to introduce the rest of the world to the King of Fruits, they came to the scene pretty late in 15th Century CE. Their affair with Mango began when they arrived in Calicut in 1498.

The journey continued as the fruit reached Brazil in 1700 CE from where it travelled to Florida in United States in 1796. Mohammed Ali Pasha, the King of Egypt ordered Mango saplings from India in 1826 and planted them in his palace. Surprisingly the places like Bahamas and Bermuda got introduced to Mango from India as late as the 1970s. 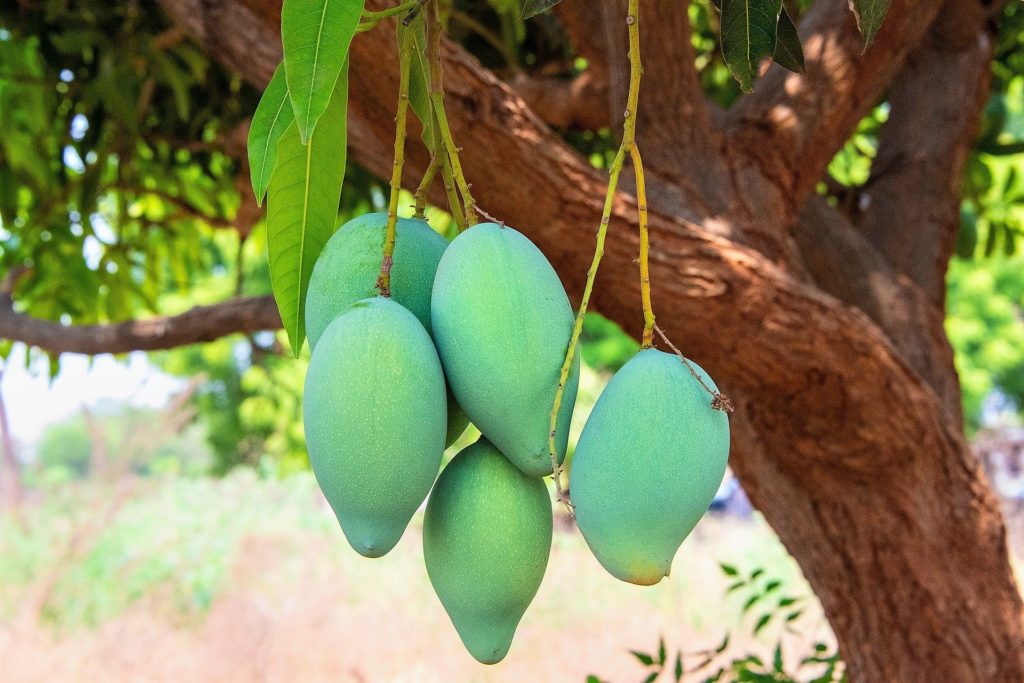 A variant of an Indian Mango

Today Mango is grown in several countries. The annual production is estimated at 50 million tonnes of which 40% is grown in India. And yet the most popular variety, the King of Mango – Alphonso [+] comes from the home of Mangoes.